Arthur Dent, after hitchhiking across the galaxy, ends up on a planet identical to pre-demolished Earth, apart from the fact that all the dolphins have gone. Everyone thinks that the Vogons demolition incident was a planet-wide hallucination.

He meets Fenny, the girl that had sorted out what was wrong with everything and how to fix it but lost it after the 'hallucination' incident.

Fenny eventually finds out about Arthur's "hitchhiking" nature and joins him on a trip across the galaxy. Together they travel to the planet where God left his final message to his creation.

And... God! That message explains everything.

This is the fourth of the five books of the "The Hitchhiker's Guide to the Galaxy" trilogy 😄. A comedy space opera, and an acerbic satire of humanity, masterfully woven by Douglas Adams and elaborately narrated by Martin Freeman. 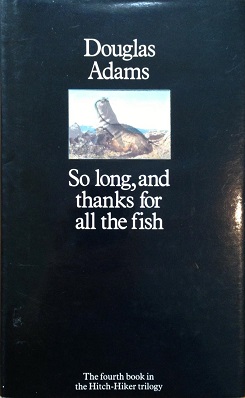