Arthur Dent is stranded in prehistoric Earth with his alien friend Ford Escort. They manage to escape though, to modern era Earth, just to find themselves dragged into another Universe-wide adventure.

They must find the keys of the gate of a spacetime-loop prison, that protects the universe from a terrible menace, that will destroy it if unleashed.

And they must do it, before the robot army, which also is looking for them, finds them and unleash the menace to the universe.

But what do all these have to do with the game of cricket?

This is the third of the five books of the "The Hitchhiker's Guide to the Galaxy" trilogy 😄. A comedy space opera, and an acerbic satire of humanity, masterfully woven by Douglas Adams and elaborately narrated by Martin Freeman. 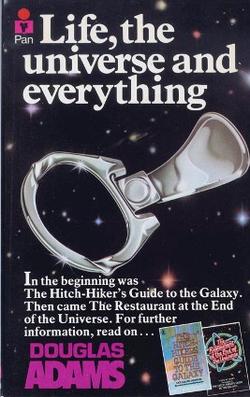