Arthur, Ford, Trillian and Zaphod escape the two mice wanting to extract the question to the ultimate answer to Life, the Universe and Everything, by removing Arthur's brain from his head.

They head towards the "Restaurant at the End of the Universe". It is a facility protected by a time-jumping capsule that allows its customers to witness the end of the universe while having lunch.

And their departure from there is even more adventurous. They lock themselves into the small spaceship that is auto-piloted to jump into a star, as part of a famous rock band show.

Their escape is even more adventurous as their escape path does not extend only in space but also in time.

Arthur and Ford end up on a planet that seems to be prehistoric Earth. And there he will discover not only the long-sought answer to the question for Life, the Universe and Everything but the source of future humankind's pathetic behaviour.

This is the second of the five books of the "The Hitchhiker's Guide to the Galaxy" trilogy 😄. A comedy space opera, and an acerbic satire of humanity, masterfully woven by Douglas Adams and elaborately narrated by Martin Freeman. 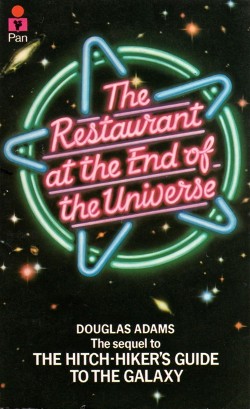